“You win! Now what? A central coast California tribute to the fairytale “Hans im Glück” brings back the true meaning of life.”

Kollagen der Vergangenheit [Collages of the Past]: Inspired by the art techniques of Dadaist artists, Karlee Gailey and Levi Schmitt created collages of four German literary periods: Hochmittelalter, Barock, Aufklärung and Klassik [High Middle Ages, Baroque, Enlightenment and Classicism]. “If you can’t understand the past, you can’t create the future. This project explores past events through a modern interpretation.” 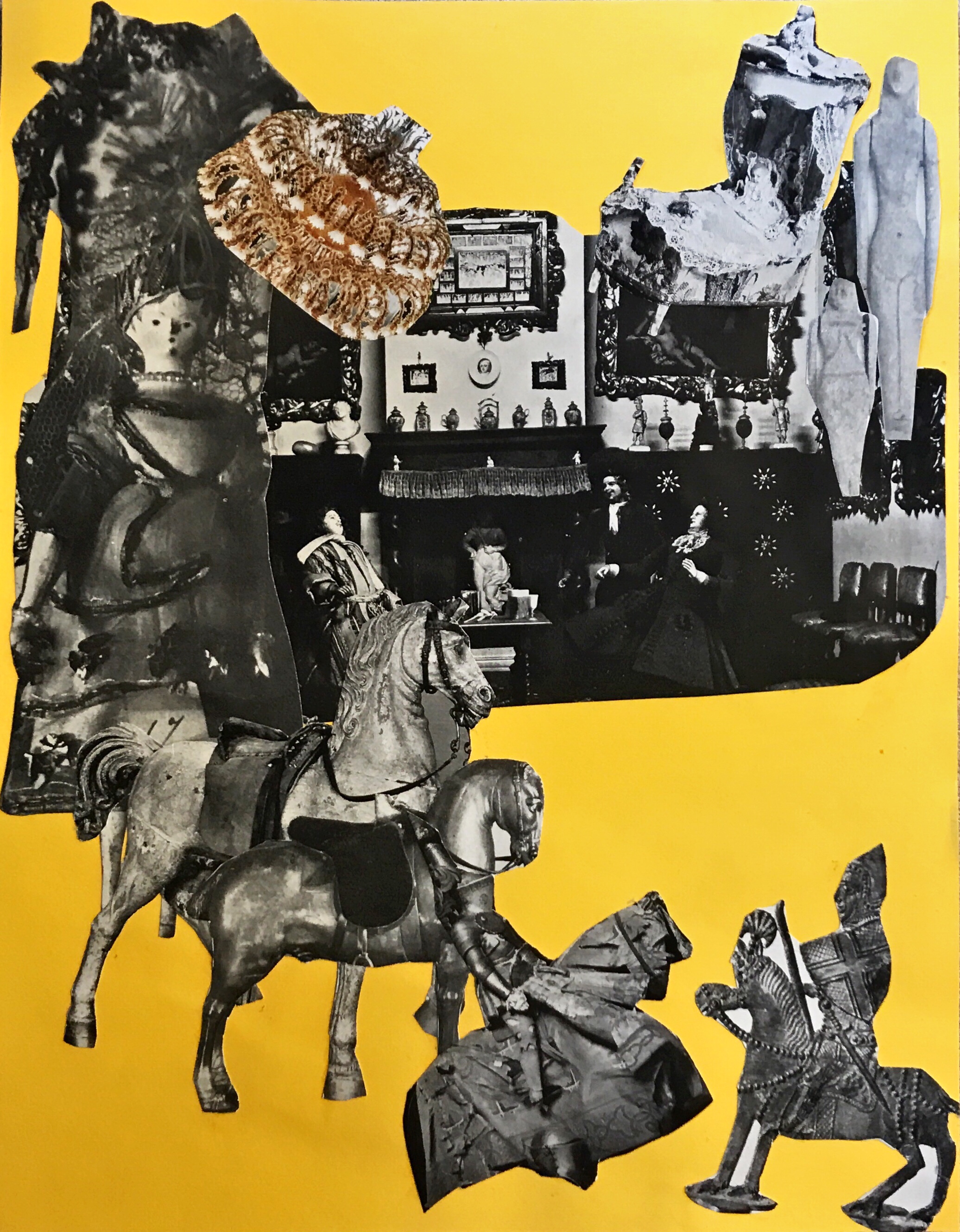 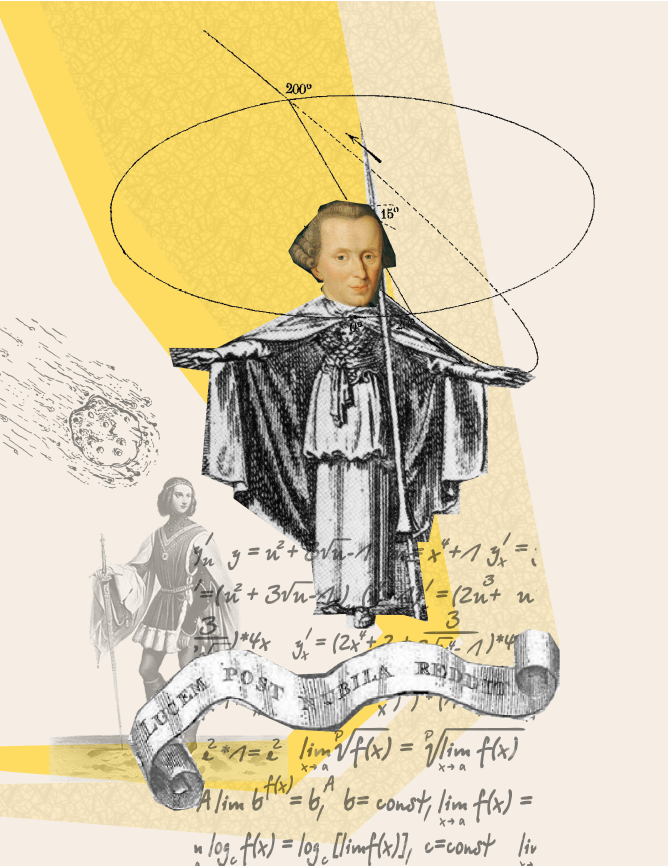 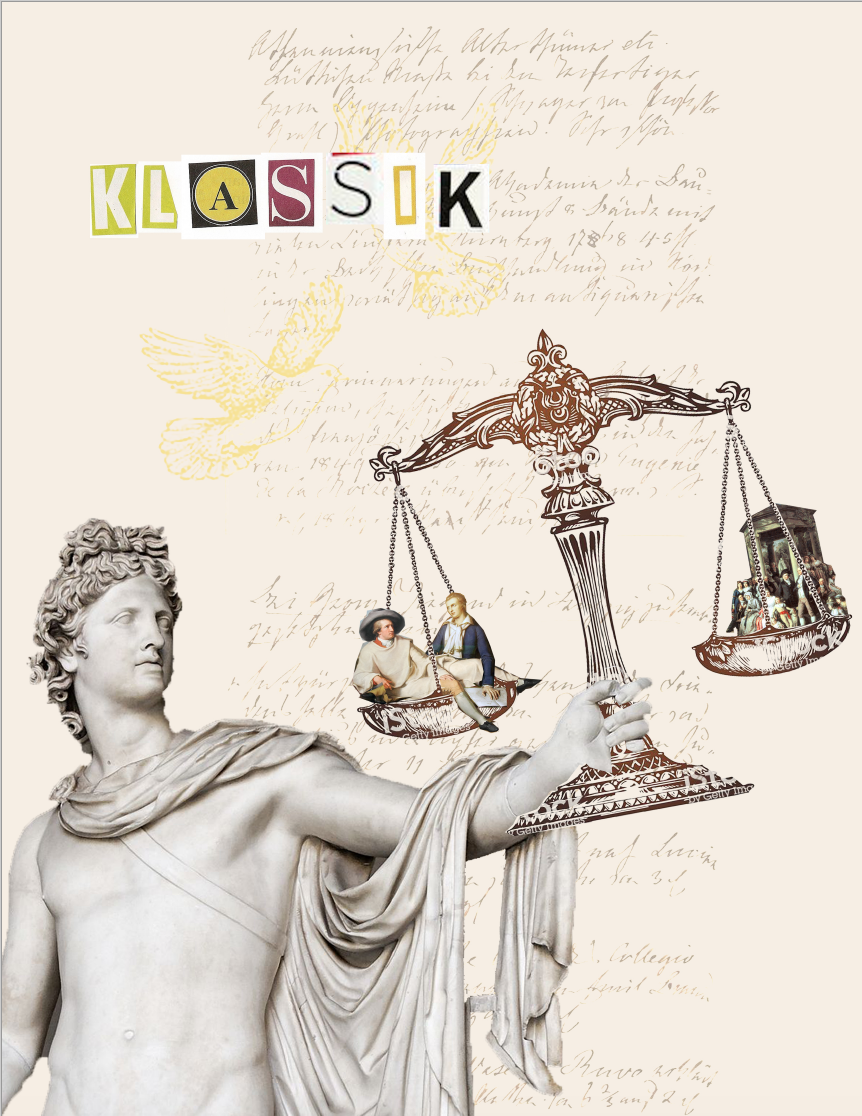 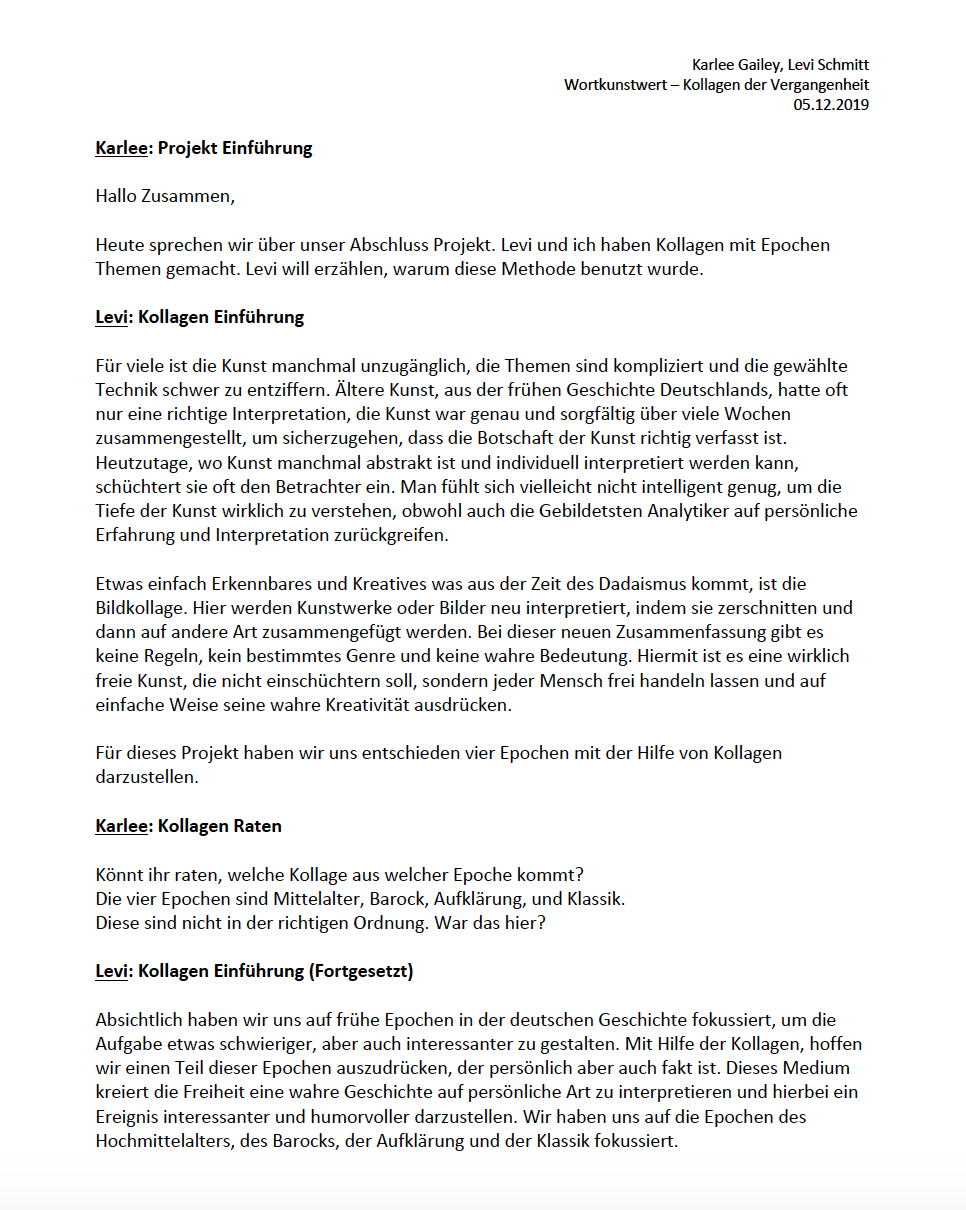 Read about the collages here 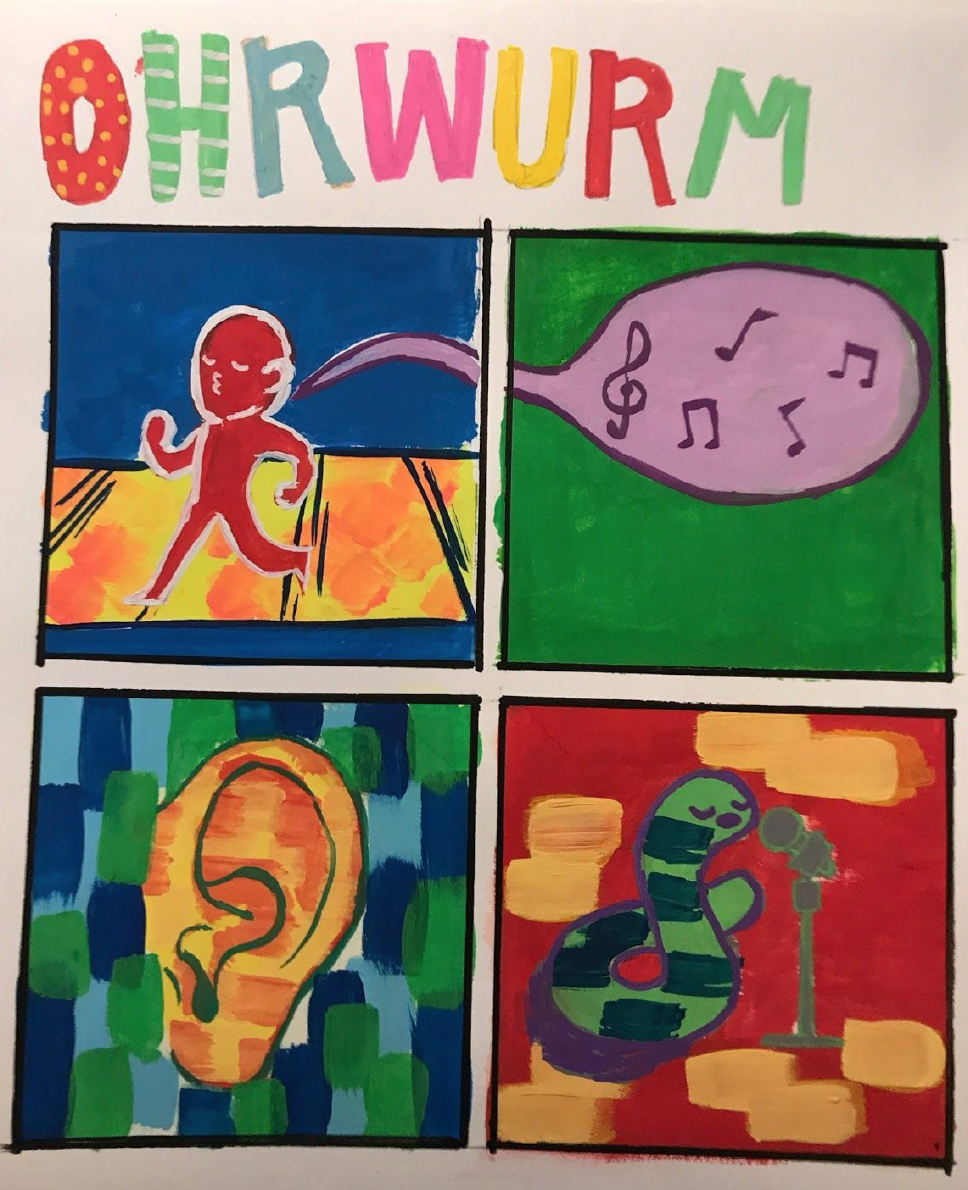 “What do ‘your inner pig-dog’ and surrealism have in common? Read our comic collection to find out! Our project is meant to combine multiple different aspects of art in the form of 9, 4-panel comics. Our original goal was to contextually teach readers of the comics new German words they might never have heard before; specifically, German words which are difficult to translate or lose some meaning through translation. In order to tie this in with German 233, we decided to illustrate each comic in a different style based on the art styles of the different literary periods we studied in the course. Each word was tied to the most relevant literary/artistic period, e.g. Weltschmerz -> die Romantik. This makes the comic-reading experience both a good way to learn new vocabulary and practice your knowledge of the characteristics of period art. We wish to impact our audience by doing just what we intended; to help them learn new and exciting vocabulary, illustrate the differences between different literary periods, connect humor, art, and wordplay together, and create an overall pleasant reading experience. Learning should be fun and visually appealing so that a wide audience has its attention captured and is intrigued.”

Die Acht Epochen in Bildern [The Eight Eras in Pictures]

“Eight eras. Eight pictures. Infinite possibilities. For this project, I have painted one picture for each literary era, attempting to reflect the themes and literature of the era in each painting. I am communicating that art is 4 universal and the themes we have learned about transcend their timeframes and can be communicated in different mediums.” 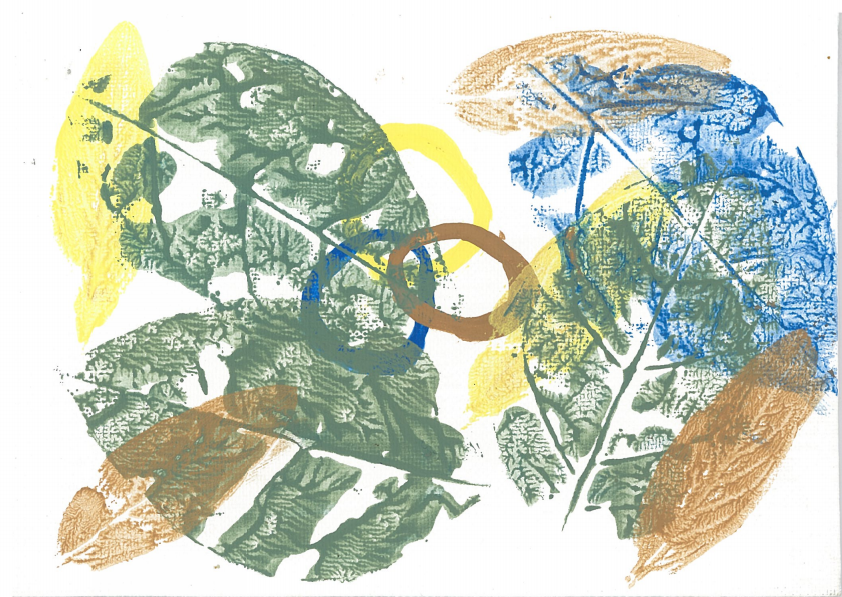 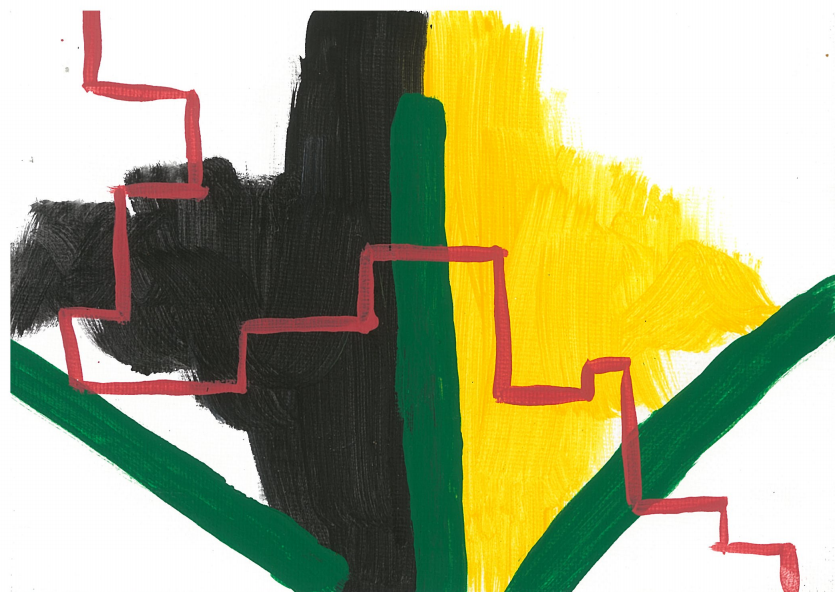 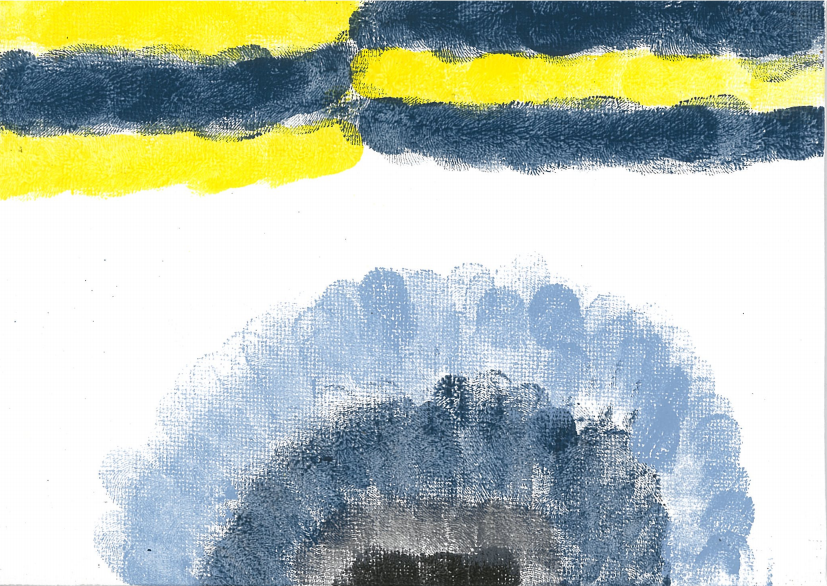 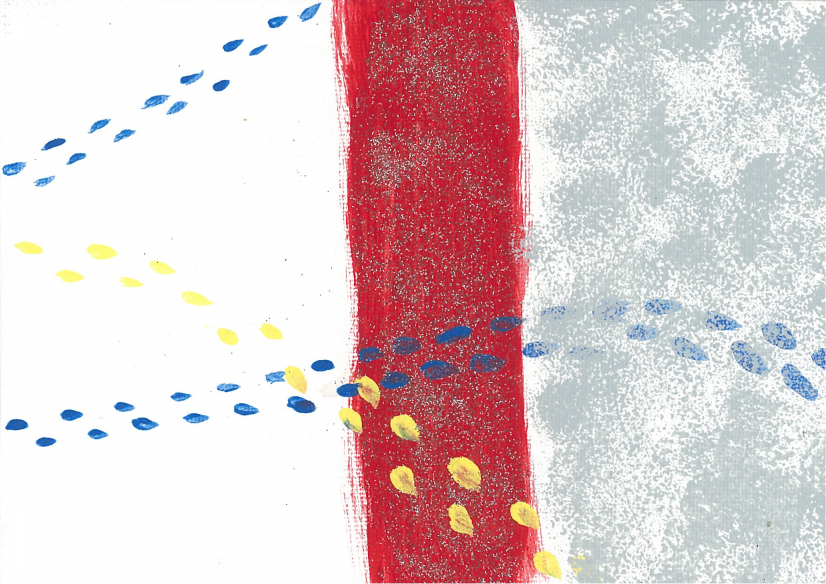 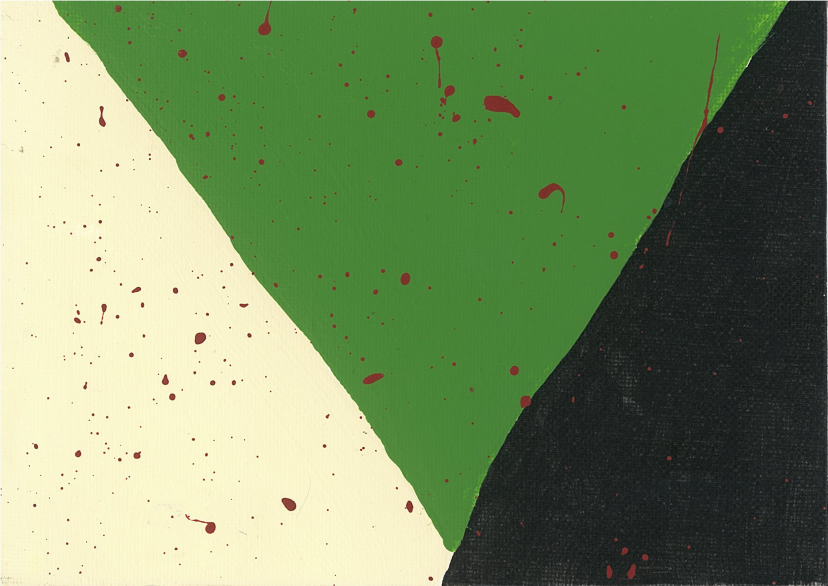 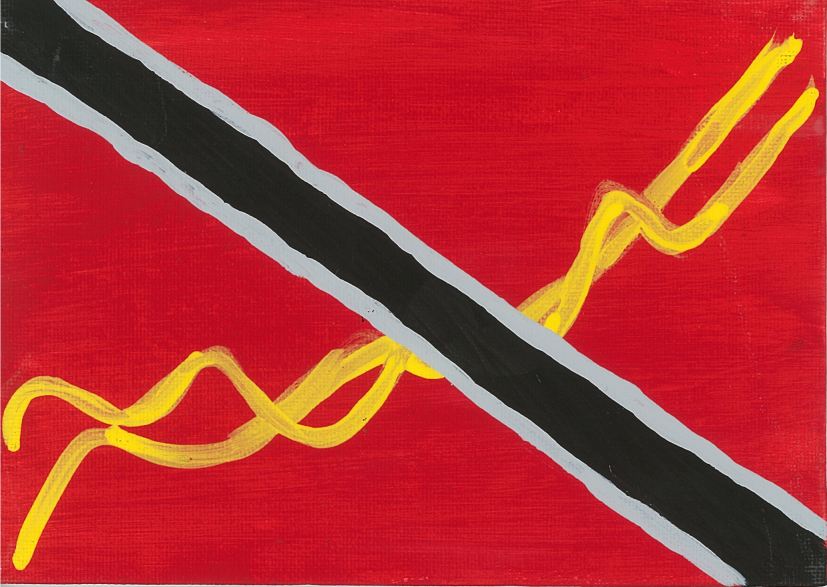 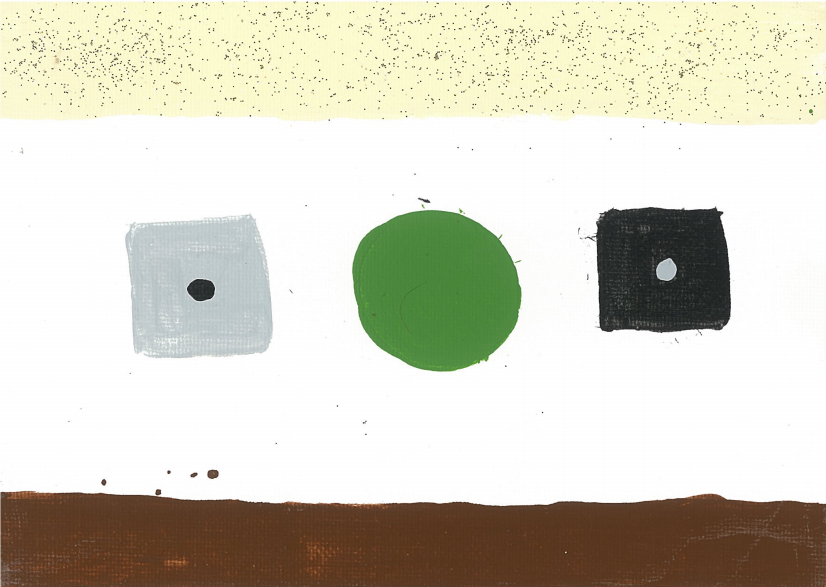 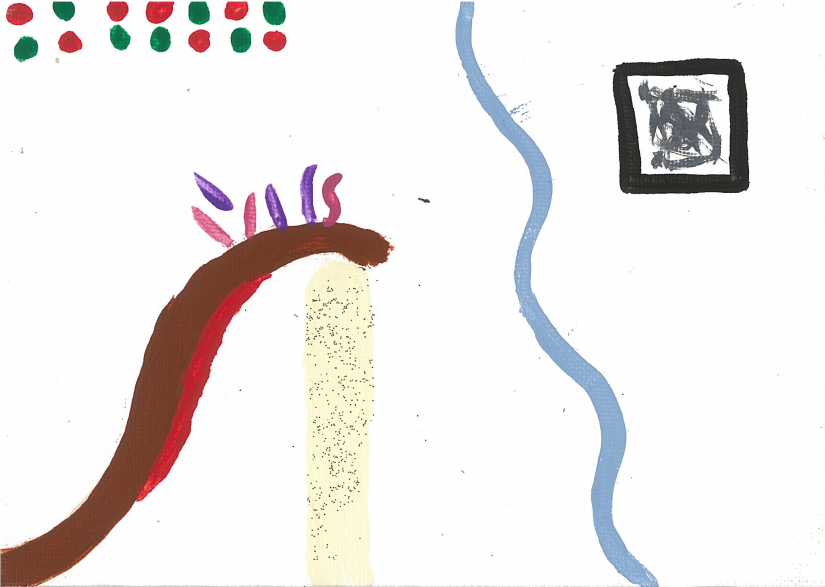 Ein informatives Zeitreise-Abenteuer [An informative time travel adventure], a short absurdist film created by Sarah Samora, Sarah Lamp and Hannah McDonnell. “We want communicate that German literature is fun and exciting. In our film, Goethe makes a time machine. He goes on an accidental journey through time and meets famous authors from many eras. He asks them about their works and what motivates them.”

“Adventure and bridge trolls, deception and trickery: will the true answers ever be revealed? Our project is a German silent film variant of the bridge scene in Monty Python and the Hole Grail. There is no single answer to most questions. In the case of the last question, the answer was too subjective and the bridge guardian paid dearly for it. We mostly hope to entertain the audience. We also hoped to spread the word of how funny and creative Monty Python skits are.” --- by Tatjana Ellis, Tom Schalow and Hunter Ethington

“We are hoping to create music that reflects the pain and joy of unrequited love.” --- by Samuel James und Tyler Hentges

Listen to the poem!

A violet was growing in the meadow,

Unnoticed and with bowed head;

It was a dear sweet violet.

Along came a young shepherdess,

Light of step and happy of heart,

Through the meadow, and sang.

if I were only The loveliest flower in all Nature,

Ah! for only a little while,

Till my darling had picked me

And crushed me against her bosom!

Ah only, ah only

For a single quarter hour!

But alas, alas, the girl drew near

And took no heed of the violet,

It sank and died, yet still rejoiced:

And if I die, at least I die

And at her feet.

It was a dear sweet violet!

“Acceptance. Unity. Friendship. Two boys cross the boundaries of politics, family ties, and comfort to realize they aren’t as different as they seem.”

Die 3. Roten Handschuhe [The red mittens] is written, drawn and designed by Dina Alarian (EE), Kathleen Kalejian (BUS), Valerie Rose (BUS), and Evelyn Vasarhelyi (BUS). This is a story “of two boys growing up as friends in Germany. Their experiences are extremely different as one boy is a native German and the other is a Syrian refugee. The story represents unity across cultures.”  The students were inspired by the ethics and philosophical ideas behind the Humanist movement and wanted their project to be based on “the benevolent ideas towards one’s own fellow humans.”

“You win! Now what? A central coast California tribute to the fairytale “Hans im Glück” brings back the true meaning of life.”

“Our project is a modern take on the fairytale “Hans Im Glück” of the Brothers Grimm. The goal of our project is to create a funny modern version of the original story from 1812 yet still have a moral to the story that surprises the reader at the very end. The film might just seem fun and silly at the start but it also has a more important moral message it wants to deliver. The moral of the story is that material things, such as the money Hans wins or the car he buys for it, do not matter as much as spending time with your loved ones and that solely focusing your life on one thing, such as a triathlon in our modern interpretation, also does not guarantee happiness even if it leads to success.” --- by Mark Schefter, Scott Sibley, Patrick McCabe, Alex Saalberg, and Sherry Saroufeem

For the Love of Color, a short film

“Our project illustrates the significance of language as a catalyst for passion and inspiration. Johann, having suddenly lost his father, loses his ability to see the world in color, leaving him void of inspiration for his paintings. He meets a young writer who, despite her quirky and initially off putting personality, helps him regain his sight through her work. Lotte’s poem that she writes for Johann embodies his individual passion, allowing Johann to not only revive his ambition, but also to see his world in color once again. Through Johann and Lotte’s love, we learn how crucial it is to remain aware of one’s inner passions and one’s identity, simultaneously recognizing that the power of love is necessary to do so.”

“Keep an open mind; you never know where a path will lead until you have walked it.” --- by Anna Reck, Lisa Bertholdt, Nicole Neumayr, Marc Hermann, Bryce Fauble

The final project for German 233 literature course in the Fall 2016 required students to use the knowledge they have gained in the course and their own lived experience to produce an original, creative work, their very own Wortkunstwerk auf Deutsch (word-works of Art à la German) while working in a team. Below are some delightful examples.

“Can one be such a good thief that even the authorities are too impressed to be angry with you? This is the remarkable tale of der Meisterdieb (The Master Thief).”

König Lauren (King Laurin), a mediaeval story about King Laurin, the ruler of a thriving race of dwarves and his secret rose garden.

“Schläfst du? Bist du dir sicher? Bei uns wachst du auf!” [Are you asleep? Are you sure? You’ll wake up!]

Was ist Dada? (What is Dada?) is a thought-provoking artistic magazine designed, drawn and created by Kristen Whalen (ANG), Jessie Fauria (GRC), Jose Quintero (ECON), Julian Trevizo (HIST) and Will Peischel (JOUR). The students wished “to encourage people to put in the extra effort to think critically about the world around them, to open their eyes, regardless of how daunting it may seem.”

“Acceptance. Unity. Friendship. Two boys cross the boundaries of politics, family ties, and comfort to realize they aren’t as different as they seem.”

Die 3. Roten Handschuhe [The red mittens] is written, drawn and designed by Dina Alarian (EE), Kathleen Kalejian (BUS), Valerie Rose (BUS), and Evelyn Vasarhelyi (BUS). This is a story “of two boys growing up as friends in Germany. Their experiences are extremely different as one boy is a native German and the other is a Syrian refugee. The story represents unity across cultures.”  The students were inspired by the ethics and philosophical ideas behind the Humanist movement and wanted their project to be based on “the benevolent ideas towards one’s own fellow humans.”

Verflochtene Hände – Mittelmäßige Musiker [Interwined Hands – Mediocre Musicians] by Birch Gwynn (WLC) and Sarah Vandevert (CE). Fascinated by German love songs through the ages, such as Minneslieder and Balladen from the Romantic times, Gwynn and Sarah took an old idea the love song -- and made it modern. Moreover, they wanted to “inspire people to create art if they enjoy it, even if they don’t feel particularly artistically oriented."

Read and listen to the song!

“Lawsuits, lasers, and the quest to counterfeit a master.”

Einen Meister zu imitieren: Imaginieren den Holzschnitt Druckprozess mit modernen Technologien [Imitating a Master: Imagining the Woodcut Printmaking Process with Modern Technologies] is an innovative and original project by Eric Dreischerf (ME) who explored the use of modern technology to reconnect with the old methods of creating Art via woodcut prints. Eric’s “inspiration comes from interest in the artwork of Albrecht Dürer and the complexity of the woodcutting process.” He hoped to share an appreciation and respect for the skill of the artists and craftsmen that used this medium to create their impressive and remarkable works.

Das Bärenritterlied (The Song of the Bear Knight)

An early medieval epic poem by Laura Borovilos that was inspired by Das Niebelungenlied (Brunhilde) and pagan beliefs, this epic poem tells a story of a female bear knight. It is a feministic twist on themes from pre-Christian Germany. The poem communicates: independence can be lonely, but love can be worse.

A creative children's story of love and adventure with an unusual ending meant to inspire us all, by Lindsay Otto, Laura Tomlinson and Daniel Henry

Listen to the story here!

The poem tells a story of two Syrian children who lose their family and set out on their journey to Germany. The inspiration came from the first-hand accounts of Victoria’s father who has been working with Syrian refugees in Germany. We wanted our readers to think about the current situation in Europe and the hardships that refugees are going through. In addition, we wanted to communicate that the children’s perspective of the world is quite different from the adults’ perspective.

A poem and a sculpture by Taylor Best, Alexander Esser and Colin Smith. A single case study that summarizes humanity’s interaction with the natural world over the past two hundred years.

The project is about the visible impact of humanity on nature.

Enjoy these five delightful short films written, filmed and acted by the students of German 233 Introduction to Literature Class, Winter 2014.  Explore genres ranging from fairy tales, to drama and comedy.

A charming fairytale with an unexpected ending.

Wonderfully acted and professionally filmed commentary on our modern lifestyle.

Witty and original adaptation of Kafka’s brilliant piece of prose about the sea god Poseidon presented as a disgruntled manager and bureaucrat of the waters.

Funny and original allegory about twins’ search for truth.