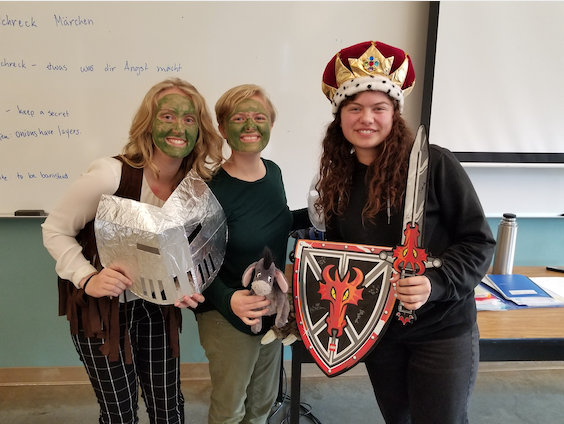 Schreck – ein Märchen is a comedy fairytale sketch based off the movie Schreck.

“Our project is a blog on a website which describes a nine-day trip through three different cities in three different German speaking countries in Europe. It is an itinerary for the traveler who wants to follow our trip advice. The blog is split up into three pages, each outlining what to do during the traveler’s three-day visit to each city. The inspiration for our project lies in the fact that all three of us have visited our respective cities and we wanted to share our experiences in each city through a travel blog.”

“Our project is meant to help German speakers better understand their transportation options around SLO. Currently, it contains basic information that focuses on preparing readers for cultural differences they might encounter while in SLO. The inspiration for this project comes from our own experiences traveling to Europe (and Germany, in particular) where we noticed that getting around was a little different. As Americans in Germany, we found it easy to get around. However, it seems that coming to the US, it might be a little more confusing as to how to get around. This project aims to provide tips, advice, and centralized information source for German-speaking visitors.”

Check out the transport guide here

“The project is about a travel agency that is influenced by the origins of myths and legends thus resulting in unique destinations for tourists that want to explore the home of these folklores. We would like to communicate a better understanding and awareness of the many legends that are based in Germany, as well as, remind folks that we are all kids inside and with that we truly are free.

“My project is a children’s book about a boy who creates a Sandcastle. Through his imagination, he builds his world up into a grand kingdom. Unfortunately, his favorite knight of the kingdom is killed by a dragon-dog. Although the hero of the story is dead, the kingdom celebrates his sacrifice and honors him for all of time. I have always wanted to write children’s books and, after this project, will deeply consider creating versions in German and other languages.

As their final projects for German 201, students designed and presented travel brochures/videos under a general heading "Ein etwas anderer Reiseführer durch deutschsprachige Länder" (A Somewhat Different Travel Guide through German-Speaking Countries). The topics covered the whole spectrum of German-speaking culture ranging from high Art and music to tasty traditional foods such as currywurst and Kartoffelsalat, from submarines to bridges, from Mozart and Beethoven to Berlin’s Berhain nightclub. Below are some highlights.

Learn more about these hidden jewels!

Sunbeams and Shadows: A Potpourri on Life and Love from CalPoly

“This video “Sunbeams and Shadows: A Potpourri on Life and Love from CalPoly” is a product of the creativity and imagination of our German 201 language course at CalPoly.  It highlights and contrasts the rich variety of German cultural expression, encompassing pathos and humor, tragedy and farce, love and the search for the meaning of life.  I recorded my students reading texts chosen by them as a part of their final oral examination in the Fall 2013. Enjoy!

Special thanks to Alex Thomas for his technical expertise in creating this video as well as his pertinent input in the editing process.”